Greta under the Bouganvillea

Filed under: Other Garden Projects — gretasherbs @ 11:37 am

On arriving mid November the maximum temperature hovered between 20-25 degrees celsius during the daytime, with a drop to about 15 degrees by night. Most days I awoke to blazing sunshine and air that was heavily scented from the abundant blossom. Pink and white Bouganvilleas rampantly adorn villa archways and pillars. I noticed an orange variety I had never before encountered. Lantanas, orange tubular Daturas and striking blue Jacarandas bloom in full force everywhere. Oleander is used as a hedging and appears to flower all year round. I have to re-learn a lot of these mediterranean plants as it is almost 30 years since I studied them in the glass houses in the Botanic Gardens, Glasnevin. It makes me nostalgic to see them again, like re-acquainting with old friends, very familiar, flamboyant ones from a distant land!

The most incredible plant specimen I have seen was an Ipomea (morning glory) growing wild in a small Cypriot village up the mountains on the North West coast. It had gone totally berserk! Vigorously, scrambling to the very top of an electric pole and completely covering an adjacent wall. Hundreds of vibrant, blue flowers danced in the sunshine. The effect was hypnotic. I have grown this as an annual climber in Ireland where it has begrudgingly produced some flowers, sulking for want of heat and sunlight. I have always loved it and now at last experience its full glory.

I am told Cyprus has two growing seasons, so crops are harvested now and again in April-May. Olives and Citrus fruits are plentiful but quality is superior in the first season after the winter rains. My passion for growing led me to the nearest garden centre to acquire compost to germinate the seed I have carefully transported from the Northern to the Southern Hemisphere.  I was shocked at the price; it did contain a water retention additive, however, most products are imported from mainland Turkey, so prices on many items are surprisingly high. Some of these seeds such as Basil and Tomato should feel completely at home here. They are now sitting on the balcony in pots donated by neighbours, wrapped up in fleece (also carried over) as the nights are turning chilly. I expect expediency as I am on limited time.  Hopefully this Mediterranean heat will prompt them rapidly into growth, or perhaps like me, they will somehow feel a familiar link to their ancient past. 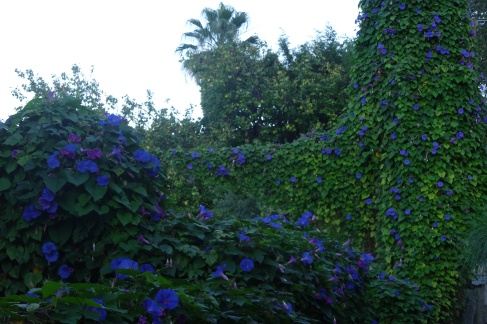